“I am delighted that the much needed new lifts and accessibility upgrades at Roseville Station are getting $2.3 million in the 2019 NSW Budget under the Transport Access Program,” Mr O’Dea said.

“This spending will make a huge difference to the lives of many people who will now benefit from lifts, new ramps, better paths and accessible toilets at a very busy rail station,” he said.

“Under the Transport Access Program, Lindfield Station is getting $3.5 million for a new Commuter Car Park and a Kiss and Ride Zone. Gordon Station has an allocation of $100,000 for bike spaces at Gordon Station.”

“The Government is delivering on election promises to keep the State Budget strong and in surplus. We have a NSW budget surplus of $802 million, negative net debt and a triple A credit rating,” Mr O’Dea said.

“It is important to encourage communities to be active and healthy and as a long-time advocate for better facilities for walking and bike riding, I welcome the $168,000 investment in local cycle lanes.”

“When we are talking multi-million dollar spending, a project costing just $10,000 may seem rather inconsequential. However, that amount will see the construction of kerb ramps that are missing at the Highfield Road and Pacific Highway intersection in Lindfield.”

“Putting in those ramps will make a huge difference to a great many people in our community. They will benefit not just cyclists but also people using walkers, wheelchairs or with babies in prams,” Mr O’Dea said. 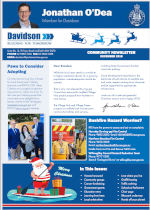 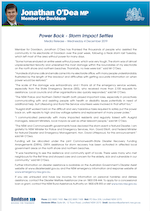