“In addition to the $150 million investment, the NSW Government has also recently gifted land in Wyatt Ave, Belrose to the Northern Beaches Council. This will help transform underutilised land into a new parkland, alongside futsal courts and other recreational facilities for the growing Forest community,” Mr O’Dea said.

“We know people love spending time playing sports, relaxing and having fun in the outdoors with their friends and family so we want to preserve those spaces for our community,” Mr O’Dea concluded.

NSW Premier Gladys Berejiklian has also announced that, for the first time, NSW will have a Minister for Public Spaces who will identify and protect publicly owned land for use as parks or public spaces.

The $150 million in funding will create a network of connected parks and open space, and improve the quality of existing parks.

As part of this package, $50 million has already been allocated to turn existing Government-owned land into new and upgraded parks at Penrith, Ermington, Frenchs Forest, Leppington, Carramar, Beaumont Hills and Allawah.

The NSW Government will also invest nearly another $150 million in national parks, improving accessibility on over 1000 national park walking tracks, with more than 200 of the most popular trails to receive substantial upgrades. 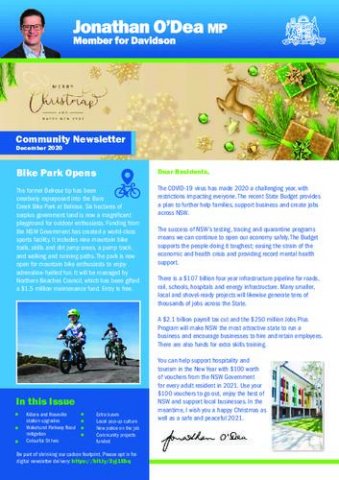